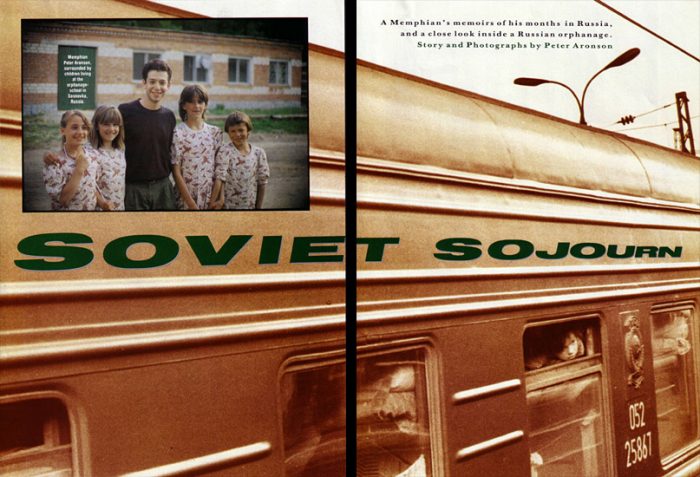 Although I tried to live as Russians do, I occasionally avoided Moscow’s infamous lines by shopping in the “hard currency stores,” Western supermarkets and stores which accept convertible Westem currency only, and which have sprung up everywhere. But to my adventurous side, that seemed as much fun as peeling the colored stickers off a Rubik’s Cube and putting them back in such a way that it looks as if you’ve solved the puzzle. This exacted no effort and caused few hairs to gray, and I rarely resorted to such a cop-out because, frankly, there’s no point in coming to Russia just to be able to say, “Look, they have Spaghetti-O’s,” or “This Big Mac tastes just like the ones back home, doesn’t it?”

Russia’s economy was in a deep crisis, its currency having gone through the floor. The country’s people, as a result, were plunged into poverty. We Westerners, though (or anyone with even a few dollars), suddenly found perversely ourselves rich. For foreigners, Russia was on clearance.

I picked up a pair of beautiful crosscountry skis for $3. Marvelous hockey skates that would go for $90 in the U.S. sell for $6 in Moscow. Russian “universal stores” sell worthwhile souvenirs at low, low prices: I got a Russian-made Lomo Avtomat camera for $9. A simple three-course lunch: 14 cents. Forgot your toothbrush? That’ll be a fifth of a penny, please.

I’m not much of a shopper, but in Moscow I always seemed to come home with something or other at the end of the day. Two things explain this: First, costs are negligible — a savvy foreigner spending rubles can live comfortably for several weeks on $100. Second, there’s a sense of urgency: Because of lousy distribution, things disappear from store shelves never to return, prompting shoppers to buy as much as possible wherever and whenever items are available. And because of inflation, prices double overnight.

But Russians have their own entrepreneurs, the most fascinating of whom are the speculyanti, or speculators, who buy goods at the low government prices and resell them on the streets for twice the price (or far more). Speculyanti may be anyone from cabbage-sellers working off the back of a farm truck to older people working to support their pensions. These underground traders may also be found literally underground, within the beautiful halls of Moscow’s Metro system. Each metro station celebrates a different Soviet theme, and their names resound with Soviet significance: Communist Youth, Revolutionary Square, October Revolution. Here, struggling to make enough money to survive, these booksellers, flower vendors, milk-, sausage-, and toilet-paper-sellers line up under enormous statues of fierce-looking revolutionaries poised to kill, weapons in hand or in front of beautiful mosaics or murals. The beautiful rail system beneath Moscow’s muddy streets is not just transportation; it’s museums and de facto shopping malls.

Still on my mind

In December, when I returned to Memphis, a friend asked me what I missed most about Russia. I answered without hesitation, “The kids at the orphanage.”

Memories of the children I met in Sosnovka still haunt me. I long to see them again, but more than that, I want to help them. I can no longer sit as comfortably in my home as l once did, knowing that these children must remain in that institution for years and years, until they finally reach the mature age of sixteen and must set out on their own, with little hope of any sort of success.

I think of Sveta, a 16-year-old girl who “graduated” from the orphanage last summer, and spent the year living in a rural Moscow suburb and working at a textile factory, earning only “enough money to eat on some days” — about two dollars a month. She complained of the bed bugs that infested the workers’ dormitory and tormented her at night.

Before I left, she told me that the factory would shut down due to a shortage of cotton. I wonder where she and the others like her are now.

I know that I didn’t cause these children’s strife, nor can I bear the ultimate responsibility for helping them. But they are not responsible either. And I can’t help but think, if I don’t do something to help, who will? Who on the outside even knows about them?

I’ve struggled with this question, and believe now that I understand the nature of my responsibility: to be a messenger. To tell everyone I can reach that the children I know and others like them in orphanages across Russia are in dire need. They need clothing, medicine, and families. And they need to know that somewhere, even somewhere far away, people care.