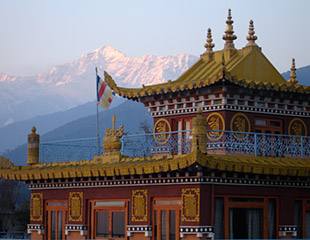 With two days remaining before the close of the conference, one major issue seemed to be tugging the project away from the singular goal of translating the Kangyur: Some scholars (at Columbia University, for example) have already been working on its companion, the Tengyur. It contains No sooner were those words out of his mouth than a tremendous thunderclap rocked the building. more than 4,000 treatises and commentaries by Indian and Tibetan masters on philosophy, science, medicine, and other topics. Together, the Kangyur and Tengyur form the complete Tibetan Buddhist canon.

Perhaps the best-known elements of the Tengyur are the commentaries written by the seventeen great Indian sages of Nalanda University, among them the masters known as the Six Ornaments—Nagarjuna, Aryadeva, Dignaga, Dharmakirti, Asanga, and Vasubandhu. The work of these sages is so important to Tibetan Buddhism that the Dalai Lama often has said that Tibetan Buddhism is the Nalanda tradition.

In the end, the translators opted to bring those working on the Tengyur into the project’s fold, under the interim name “The Buddhist Literary Heritage Project.” They adopted a resolution laying out its goals:

One-hundred-year vision: Translate and make universally accessible the Buddhist literary heritage. [By not using the word “Tibetan,” the translators wanted to convey the aim of eventually including Buddhist texts from other traditions and languages, too.]

Twenty-five-year goal: To translate and make accessible all of the Kangyur and many volumes of the Tengyur and Tibetan commentaries.

Five-year goal: To translate and publish a representative sample of the Kangyur, Tengyur, and Tibetan commentaries, and to establish the infrastructure and resources necessary to accomplish the long-term vision.

Eventually, they’d like to publish both the Kangyur and Tengyur under one umbrella, with the texts available as a bound set similar to the Encyclopedia Britannica and in a searchable electronic format. And though they’d like to receive credit for their work, they don’t want to publish the words of the Buddha and other great masters under a restrictive copyright. Rather, they’ll probably publish the translations under what’s known as a Creative Commons license, which will allow anybody to use the work in the future, as long as they credit the people who did the original work.

The translators elected Dzongsar Khyentse Rinpoche as interim leader of the newly formed group. A preliminary version of the group’s resolution included the language: “We resolve that interim director Khyentse Rinpoche will be empowered to select, in consultation with project participants, the leaders and members of the working committees.”

Thurman chided his colleagues for wording that made him uncomfortable, saying, “We’re not really in a position to empower him.”

No sooner were those words out of his mouth than a tremendous thunderclap rocked the building. There was a flash, and the lights went out. The translators broke into applause and laughter. When the crowd settled down, they changed the wording to, “We humbly request Dzongsar Khyentse Rinpoche to select…”

The conference, though, was not viewed as an end, but a beginning. What is certain is that over the course of the conference, solidarity of purpose helped the translators slowly but surely coalesce into a team—one that, through its sheer size, may be able to tackle translation projects that were previously impossible.

Thomas Yarnall, usually rather understated, practically gushed with excitement. “This conference has been very remarkable—a very exciting, historic conference,” he said. “I’ve been doing this for thirty, thirty-five years, and you can really feel that this is a turning point. This is it.”

That word, “historic”—I wondered about that. The conference had been billed as “a historic gathering of translators,” but will it really go down in history as a turning point? That’s a bold claim. Will future historians of Buddhism look back at this meeting and compare it to the efforts of Tibet’s great Dharma patron, King Trisong Detsen, to bring the Buddhadharma to his country from India?

An enthusiastic Elizabeth Napper summed up the mood: “The beauty of it is finding a way for people to work together. It’s a hugely optimistic vision, but I think the potential is just tremendous.”