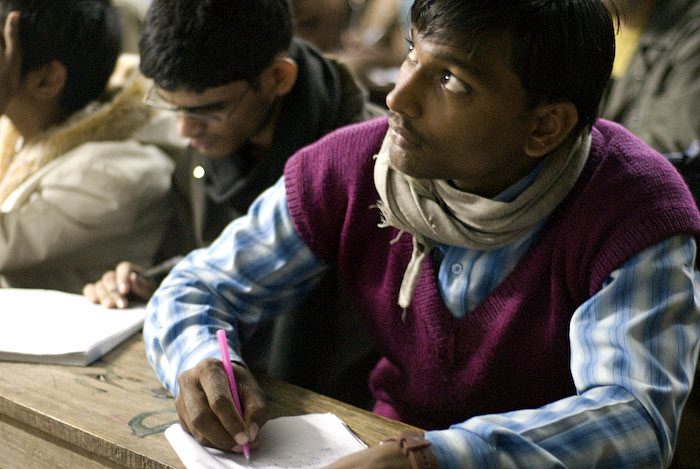 Every year students in India vie for places at the nation’s premier science universities. The colleges are known collectively as the Indian Institutes of Technology, or IITs. Across the country, hundreds of thousands students take the entrance exam. But only a tiny handful — about the top two percent — are accepted.

One math tutor, Anand Kumar, has had amazing success getting his students in, despite the fact that many come from extreme poverty. In this report, I visit the Ramanujan School of Mathematics in Patna, Bihar, in north-central India, and tell this teacher’s extraordinary story.

The murky, polluted city of Patna, India, is bustling with hawkers and all kinds of vehicles, motor and otherwise.
A man in Patna walks past a wall covered in cow dung, which is being dried for use as cooking fuel.
Recruiters from math and science "coaching schools" can be found all over the city.
Anand Kumar teaches a math class at his Ramanujan School of Mathematics.
There are nearly 400 students in this class. The classroom has only two walls.
Those sitting near the front are fortunate enough to be able to see the blackboard.
Those seated near the back aren't so lucky.
A member of the elite Super 30 scholarship group.
Students don't mind the simple benches as desks or open-air classroom. "Air conditioning won't get us into an IIT," one says.
It's a conservative society. Boys and girls sit separately.
Regardless of their background, if they get into an IIT, their future is assured.
Students crowd around their physics teacher as he explains a problem.
The humble school where the magic happens.
Ever since the attempt on his life, Anand Kumar has had an armed police bodyguard 24/7.
Students' scores, posted on the wall here, determine how close they get to sit.
Seats A-1 and A-2, right up front, are for the best students in the Super 30.
Members of the Super 30 having dinner in their dorm room. Kumar's mother cooks for them herself.
A student touches Kumar's feet — a gesture of reverence — as he enters the school.

The radio story originally aired on the World Vision Report
in January 2010.