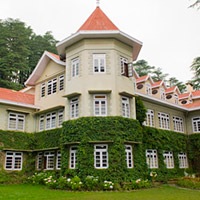 Spread across seven hills in the northwest Himalayas among lush valleys and forests of oak, rhododendron and pine is the capital of Himachal Pradesh that was once the summer capital of colonial India. And today, there is still more than a hint of the Raj in the former hill station of Shimla.

At the end of the Anglo-Nepalese War in 1816, the British designated several spots in the contested Indo-Nepali border region for use as strategic outposts. One of them was a beautiful village around 2,200 meters above sea level. There are differing versions of how Shimla got its name, but most believe it comes from Shyamala, another name for the Hindu goddess Kali, worshipped at a temple in the forest.

It was in 1822 that Captain Charles Kennedy spurred a wave of construction in Shimla when he had a house built there. But the tiny outpost truly came to notice in 1827, when the British governor-general decided to spend a summer in the place. Shimla’s mild summer climate quickly caught the attention of other officers of the Raj — the colonial British government in India. The following year, the army headquarters and its staff set up camp in Shimla for the summer. From there on in, Shimla became increasingly popular — so much so that in 1864, the place was declared colonial India’s official “summer capital.” Later, Shimla came to be known as the “Queen of Hills.”

The viceroy and his government, the army, families, servants and merchants would make the arduous 2,000-kilometer journey to Shimla from Calcutta (today known as Kolkata) every March. They made the same journey in reverse in October. Just 370 kilometers away, Delhi later replaced Calcutta as the capital, making the annual trek much easier. In 1903, the British completed a narrow-gauge railway, whose diminutive locomotive led to its being called the “toy” train, to Shimla from Kalka. The UNESCO-recognized train route passes through 102 tunnels and crosses over 850 bridges. Before its advent, visitors had to travel the 69 kilometers from Kalka along a bridle path in two-wheeled carts pulled by pairs of ponies.

The hills of Shimla — Elysium, Summer, Jakhu, Pleasant, Prospect, Observatory and Annandale — are covered by forests where deodars, pines, oaks, rhododendrons and willows appear and disappear amid the constant fog and rain in summer and snow in winter. The city was laid out in levels. At the highest, one can still glimpse, nearly lost in their extensive gardens, homes with big windows and sunrooms that once belonged to the British.

As one walks downhill, the open space begins to shrink and the noise level rises as one approaches the throng on the Mall — the 6-kilometer, east-west pedestrian thoroughfare that is Shimla’s main artery. The street is also one of the town’s main meeting places and a key shopping area.

“During the Britishers’ time, the Mall was reserved for them,” says Francis Chug, owner of C. Fook Chong, a colonial-era shoe shop on the Mall. “Average Indians couldn’t walk on the Mall. You had to be dressed properly and educated, like a gentleman, because English ladies were on the Mall.”

Violators would be relegated to the Lower Bazaar — a chaotic maze of narrow streets and alleyways. This area was intended to be the main hub for the ordinary folk, and it continues to serve as the city’s vibrant market and main shopping area. Its green and maroon sloping roofs cascading down the mountainside constitute one of Shimla’s most picturesque views.

Today, the Mall is the main social walk and tourist shopping street. Here, you find yourself in the middle of what looks like a traditional English town, with its little shops and larger buildings in Tudor, Victorian and Edwardian styles. Other cities, such as Mumbai and Kolkata, boast their share of Raj-era buildings, but nowhere else in the country can one find such a concentrated area of relatively well-preserved and diverse colonial architecture.

Women walk the Mall dressed in brightly colored salwar kameez, a traditional north Indian outfit consisting of a long shirt, pajama-like pants and a scarf draped over the chest and shoulders. Most carry mobile phones and many sport the red bangles on their arms that identify them as newlyweds.

Though the homes-turned-offices might seem more at home in East Anglia, a macaque hanging from a sign above a doorway to an ATM and grasping an ear of corn it has stolen from a tourist serves as a reminder that this is still northern India.

Though Shimla has now grown beyond its British-planned streets, its beautiful mountain setting and cool climate remain as much a draw as ever for Indian tourists.

“lt’s like being in permanent air-conditioning!” says Shagufta Chaki from steamy Mumbai, who honeymooned in Shimla and returned with her husband and two children. Whether escaping the heat of the plains in summer (April through June) or coming to experience in person the wonder of snow (usually in late December), Indian couples and families throng the city much of the year. When winter weather cooperates, visitors can even ski and skate.

Take it easy, take a stroll

With its vehicle-free streets, Shimla invites one to take things at a leisurely pace. “If people enjoy walking, they’ll like Shimla,” says one hotelier. Those who wish to take it easier can always hire a pony or horse to carry them up and down the streets. Or they can stop for a rest at the Ridge, a hilltop plaza and popular meeting spot ideal for contemplating the sweeping views of the mountains and valleys.

The Ridge is crowned by Christ Church, built in 1857. The stately yellow edifice features tall, arched stained-glass windows surrounded by a fresco designed by Rudyard Kipling’s father. Inside, tablets commemorate British officers and citizens of the colonial period.

At the top of a hill in Boileauganj, at Shimla’s edge, sits Viceregal Lodge, surrounded by forests and gardens. Here, in 1947, the decision was made to partition India and the two countries that became Pakistani and Bangladesh. When the grounds are veiled in fog, visitors arriving through the forest path are treated to an imposing view of the structure rising before them. Inside, the ornate teak woodwork has been preserved, and the building now serves as both the Indian Institute of Advanced Study and a museum.

Many of Shimla’s other colonial buildings have retained their period exteriors, but inside have been turned into schools, government offices and modern hotels. Some former British residences, however, have maintained their interiors more or less intact. Through the years, they have changed hands from English lords to Indian maharajas.

Chapslee, one of the oldest homes in Shimla, was built in 1835 and once served as the home of the governor-general of the East India Company. Today, it remains in one of India’s royal families. Kanwar Ratanjit Singh, grandson of the late Raja Charanjit Singh of Kapurthala, was born at Chapslee in 1940 and opened it for guests in 1976. The distinguished guesthouse, which preserves its Raj-era ambience, is also renowned for its cuisine.

“My grandfather was a gourmet, and his table was considered one ofthe finest in north India” says Singh. “It was English cuisine, but largely influenced by French.” These days, Chapslee’s chef, the raja’s great-grandson, mostly serves traditional Indian food. But for dessert, Singh says, “I am very proud to serve certain things that are very traditionally British: bread-and-butter pudding, steamed ginger pudding, baked apples, apple crumble.”

Another home that transports one back in time, Woodville Palace, was from 1866 the official summer residence of British India’s commander-in-chief. The estate now belongs to the royal family of Jubbal and evokes an older India. Guests sip their afternoon tea in the Tiger Lounge beneath trophies from hunting safaris and surrounded by art deco furniture.

In keeping with its role as the colonial summer getaway, Shimla has always offered a broad range of leisure activities. The tradition of theater dates back to at least 1837, with the founding ofthe Amateur Dramatic Club. The Gaiety Theatre, modeled on the establishment of the same name in London and designed by the architect who created Viceregal Lodge, was a center of entertainment for the British and is another of Shimla’s architectural jewels. It recently completed a five-year restoration and once again offers live performances.

Like the city itself, Shimla’s outskirts and surroundings are full of history. Chail, 45 kilometers away, boasts one of the highest cricket pitches in the world (2,444 meters), which also doubles as a polo ground. Chail’s origins bring together British colonial and royal Indian history in a rather personal way. The town was founded after the maharaja of Patiala was banished from Shimla for eloping with the daughter of the commander-in-chief of the British Indian Army. His splendid palace is now a heritage hotel.

Masters at making use of space, the British used Annandale for recreation, including cricket and polo, and it remains a popular site for the games to this day. Nearby Naldehra offers one of India’s oldest and highest golf courses, one with a uniquely Indian feature — a Hindu temple in the middle. Like Shimla itself, it is a fascinating blend, emblematic ofthe cultural confluence that has
helped shape the nation.